A workplace bullying fatality – Dubbo Council, a toxic culture and a cop out response? 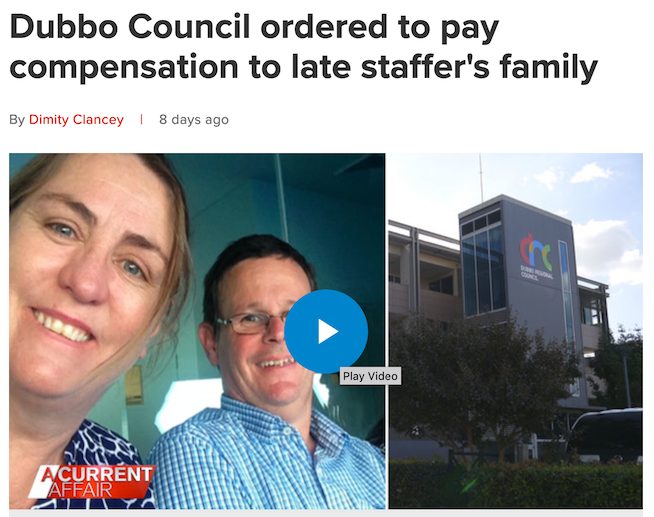 A Current Affair last week aired an interview with Thea Findlayson. In an unimagineable outcome, she found her husband, Mark, at home having ended his own life. Mark had worked for Dubbo Council for almost 20 years.

Dubbo Council was recently found to have contributed towards Mark Findlayson’s death, and as a result were ordered to a Workers Compensation Payment of $800000 to Thea and Mark’s two daughters. It was a claim that was uncontested by the Council.

This is a tragedy that could have been prevented. However, the question that needs to be asked is, in relation to their response and ensuring employee safety in the future, are they using mental health as a cop out?

Listening to the interview, we hear words describing the workplace that are not new to our ears. Toxic workplace, dysfunctional office, unrealistic pressures.

We learnt that Mark’s job with the Council was to manage infrastructure and planning. This role eventuated out of a council merger in 2017. When Mark asked for help because he was overwhelmed, he was met with a response that he should resign his position. Thea advised “that was the most catastrophic thing that could have happened to him”.

The Response of Dubbo Council

In a media statement provided by Dubbo Council, they have responded that they have developed a mental health policy and framework, introduced mental health training and developed a well being support plan for staff with practical ideas, engaged a corporate well being expert to run sessions with staff and run regular bullying and harassment training.

And that’s great. We want empowered staff who know what to do and where to go when they need help. But what I read is lacking.

There are two main perspectives when it comes to bullying risk factors in the workplace. One is that there are individual risk factors which emphasises the relationship between bullying and the individual. An example of this includes that employees with certain characteristics might be targeted with bullying responses. The second is the immediate work environment and work design which can lead to, or trigger, bullying behaviour.

The Dubbo Council response made available fails to address this second risk perspective. Where is the Council’s response having investigated and addressed unrealistic pressures which can lead to bullying type behaviours? Workplace change often increases bullying behaviours in the workplace. How have the Council improved their change management systems to ensure that negative workplace behaviours are minimised and/or managed in future? Have they completed their root cause analysis of workplace systems failures or was it just easier to blame an individual and their mental health?

In his interview, Acting Mayor Stephen Lawrence supports an inquest. It’s now two and a half years after Mark Findlayson’s passing, why was this not prioritised and actioned sooner?

Has individual mental health in this situation has become the cop out response for an organisational systems failure? I can’t help thinking yes.

Prevention of bullying, ensuring employee psychological safety, relies on effectively diagnosing the problem and causes. Is keeping your employees safe and alive your priority?