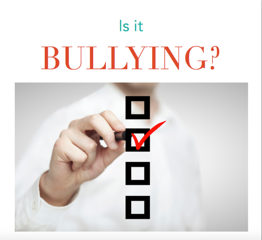 Every time I tell someone for the first time that I run a consultancy specialising in workplace bullying, it inevitably leads to a story of his or her experience. On some occasions it is experience of behaviours directed at them. On others, it may have been what they witnessed someone else subjected to. Invariably they tend to use the word “bullying”.

The lack of understanding of bullying can be linked to a few factors. Workplace bullying is a relatively new field of research and action, with some of the first emerging in Europe in the early 1990s. However, it was not until 10-15 years later that countries, including Australia in various states, started to implement changes bringing in legislation to combat workplace bullying.

Another probable cause is that this is a symptom of the word “bullying” being used increasingly in the media with a story with no explicit definition. Media articles often convey a few tactics used by the bully and the terrible impact on the target. However, this is not done in a way that helps us to understand “What is bullying?” Often where there is a gap in knowledge our brains have a tendency to pull together what we know and plug the gap with what we think it could or should be based on our own experience.

But fundamentally, what people think it could or should be is not how our world works. Bullying has been defined by researchers and lawmakers across the globe, sometimes with slightly differing variations but with some key fundamental elements.

In Australia, we are broadly consistent with those definitions. The Fair Work Act 2009, Safe Work Australia, and Worksafe Victoria have defined workplace bullying as comprising of three common characteristics:

It sounds so simple. Yet, the truth is when this is mixed with the complexity of human interaction, simplicity can be lost quickly.

However, this definition provides us with a grounding point for our conversations. When somebody reveals their experience to me, there are two things that it is important to do. The first is that I validate their experience when it should be validated. For many of us, validation is a pathway to both harm minimisation and recovery.The second is that I explain what bullying is.

It is this question which has lead me to action and developing the “Is it Bullying?” checklist. It is only by understanding what bullying is, that we will be able to stop it from occurring and keeping people safe and well at work.

Are you curious to learn more about stopping workplace bullying?